The Second War of Futuris Clevelandis

Coming this Winter to Drawbridge Games.

The Second War of Futuris Clevelandis:

Violent warp storms have erupted around the Ohioa System.  The warp instability has damaged and cut the transit of a number of chaos and xenos ships causing them to be trapped in the system requiring repairs. Luckily an Imperial world with sufficient manufacturing capability is within the system, Futuris Clevelandis.  The ships limp towards the planet intent on taking what they need to escape the system.  Though some may just decide planetary conquest will be more fun.
___

What do players need?

Commander: Pick and name an HQ unit to be their forces commander to be used in games.  While the commander is alive during a game he grants 1 extra command point per game.
Injuries - If a Commander unit is defeated during a game, the model owner will roll 2D6.  2-3 The Commander is slain and a schmo takes their place and the player loses the possible bonus command point.  4-12 The Commander recovers with some fancy scars and resumes the fight.

Optional:  Flyer Vehicle(s) to participate in the Air Superiority battle in Phase 2. 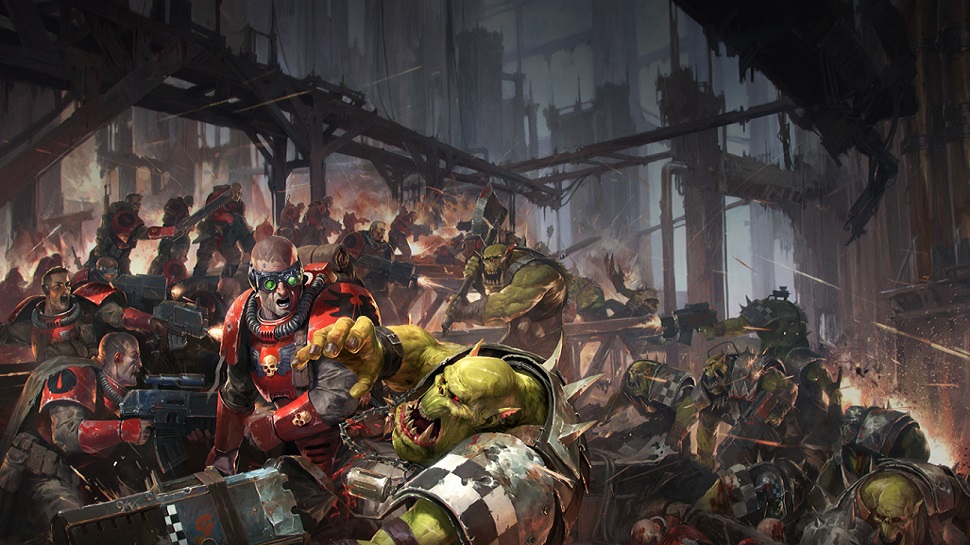 Phase 1: On the Hunt

Enemy ships have appeared in orbit over Futuris Clevelandis. Each of the various Xenos and Chaos factions have dispatched elite scout teams to the surface to find supplies for their ships, while Imperial forces scramble to intercept and eliminate them.

Forces:  100 pts for standard kill team rules.  Players may also choose to use Commanders/elites and use 200pt forces.

Imperial Forces will always be the defender.

Faction Victory Points:  For each game won by a faction they earn 1 victory point for phase 1.

Victory Bonus:
Any faction with more victory points that the Imperial faction earned at the end of the phase may participate in the special Vital Sabotage - Kill Team mission during phase 2.

If the Imperial Faction has more victory points than all other factions each Imperial player will gain 1 extra command point in each of their phase 2 games. 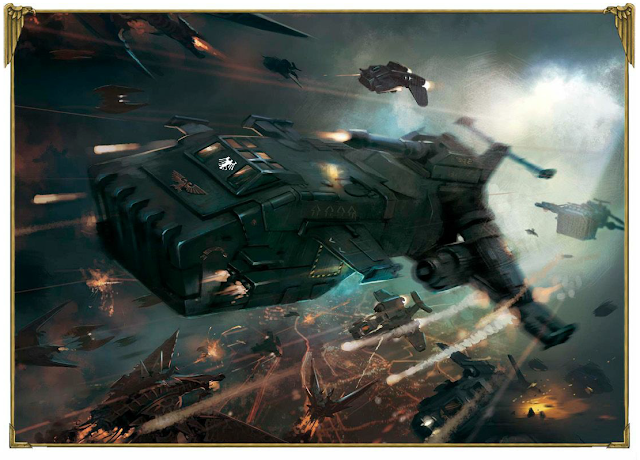 Phase 2A: Air Superiority Free For All Battle Rules

Eligible Vehicles:  Must have the flyer unit type for a battle forged army.

Duration: 5 Battle Rounds.  Turns are taken by faction.  Factions roll off for initiative each round.

Deployment:  Players Deploy along an 18” section of a board edge along with any allied craft.  Deployment areas may be enlarged per Campaign Managers discretion.

Balancing:  This scenario uses imbalanced forces.  Faction players with a force of less points value gains extra command points to use in the battle.  For every 20 power points less than an each opposing faction the smaller faction force gains 1 additional command point to be split among that teams players.

Reward:  The Faction that gains Air Superiority will be the only faction allowed to use units with the flyer unit type and use deep strike abilities in the finale battle “Fortress Siege”

Phase 2B: Moving in for the Kill

The invading forces have gathered enough intelligence to pin point the location for the resources they need to repair their ships. Those resources are secured in Lebron Fortress outside of Hive Primus of Futuris Clevelandis.  The lead Xenos and Chaos elements are spearheading attacks into Imperial lines to secure staging points, control the skies and begin infiltration of the heavily defended fortress.

Xenos and Chaos players should try to play against Imperium players.

Victory Bonuses:
If Xenos/Chaos Player won a victory against an Imperial player in the The Angels of Death Descend scenario they earn the Flanking Maneuver Bonus in phase 3 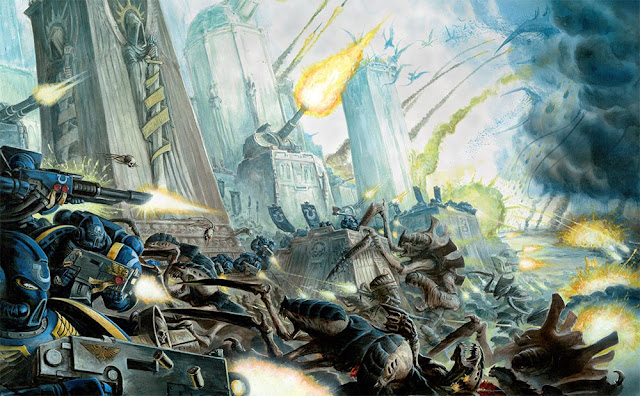 The forces of the Imperium desperately dig in and reinforce the fortifications of Lebron Fortress. The alarm sounds and the troops rush to their positions in the trenches and fortress wall.  Lasguns and bolters are readied, but will it be enough to stop the Chaos and Xenos forces rushing towards them?  The Emperor Protects!

Duration: 7 Battle Rounds:  Turns are taken by faction.  Factions roll off for initiative each round.

Forces: Players select a 75 power point force.  It is recommended that the attacking forces have transport vehicles to help assault the fortress.

Deployment: Imperial players deploy first.  Players may choose to deploy forces in the trench line, the Fortress Wall or the Fortress Supply Depot

Xenos/Chaos Forces roll off and choose a deployment zone from those designated on the deployment map. If a faction won the Flanking Maneuver bonus they can deploy up to 50% of their force in the flanking deployment zones.

Objective:  Take and Hold - There will be 4 objective points on the 4x4 board(Fortress Interior), 1 objective point in the trenches and 1 objective point at the fortress wall.  An objective marker is considered controlled by the faction with the most models withing 5” of the marker.  Objectives are scored at the end of the 7th or campaign manager’s designated round.  Each objective is worth 1 victory point.

Vital Sabotage: The faction that had the most victory points and completed the Vital Sabotage kill team mission in phase 2 earns the Special Ability “Breach Charge”.  At the Beginning of the Second Battle Round the faction with the Breach Charge ability may choose a section of the fortified wall to destroy with hidden charges.  All units within 4” of the wall seleced suffer a mortal wound.  Any unit on top of the chosen wall section suffers 2D6 mortal wounds and must be placed on the battlefield within 6” of the destroyed wall.

Reinforcement Bonus:  A player with this bonus may at the beginning of their movement phase place 1 destroyed unit back onto the table in a flanking deployment zone.  This placement is considered to be that units movement.  This unit may not be placed within 3 inches of an enemy unit.
Labels: #Warhammer 40k